The multi-faceted and rebellious designer studied at the Cranbook Academy of Art, thanks to a scholarship. He worked artistically skillful skills in sculpture which he incorporated later in the creations of its furniture. First only in America, soon after he obtained worldwide recognition for his work. The linking of production methods and material to be processed played an important role for him. He moved to Pennsylvania in 1950 to set up his own studio. He began working for Hans Knoll. Together, they developed five designs for seating. One of them has become famous as the Diamond Chair. After a dispute with the furniture company and slight modifications to the Metal fabric of the seat, the Diamond Chair became a sales success. The license revenue from its armchairs allowed him to focus only on his sculptural work and his sound sculptures. With these sculptures he produced some LPs entitled Sonambient.
The Wire Chair can be regarded as the highlight of his furniture designs which sprang from a very own series of steel chairs. The unique construction of this design classic is based his nature to connect sculptural ideas under modern standards with ease and a strong awareness of substantive ways. In this he was a true master of his art. 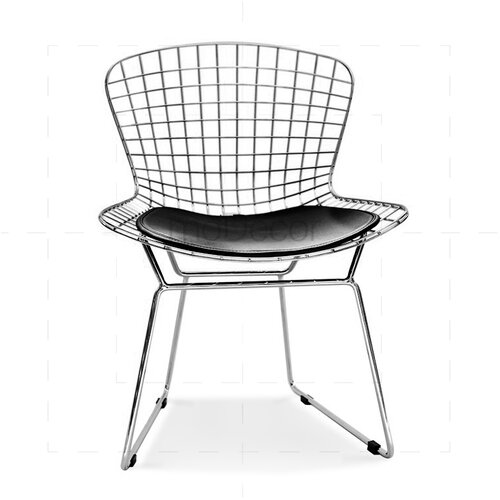